So we've been having a great time the last few months, experimenting with duct tape, and trying out various ideas of ways we can use duct tape for crafting! 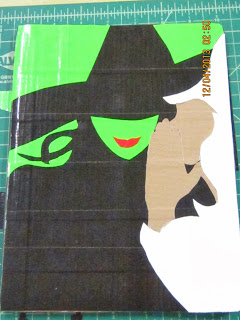 Wicked is one of my absolute favorite musicals, and I've always loved the cover of the playbill, with Glinda whispering to Elphaba. I got it into my head that I needed to recreate that picture, using nothing but duct tape!

Back when we saw Wicked, I had purchased the big, souvenir program, and I used tracing paper to trace the picture off the front of the program. I used a non-spiral notebook as my base, and began mapping out which colors would go where, and the best ways to go about recreating this picture. I got side-lined for a while when I couldn't locate a cream colored duct tape to use for Glinda's skin, but I finally got my hands on a tan that -while a little darker than I'd wanted- would work well enough.

I didn't want to do any of the small details or facial features, because I liked the idea of it being more simple; but at the last minute I decided to add the red lips on Elphaba, and I think it was the perfect touch!

It came out exactly the way I pictured it, I couldn't be more pleased :) Now onto my next "painting" which is going to be a My Little Pony picture
for my goddaughter! Crossing my fingers that it turns out just as great as the Wicked notebook did :)
Posted by Unknown at 3:30 PM